Nicholas Kekic is a third generation glassmaker whose designs are distinctive for their strong, simplified form and jewel toned colors. Kekic uses raw earth materials and renewable energy from the Connecticut River to melt and cool his glassware.

“I find glass most beautiful when worked in such a way that somehow captures and eventually expresses the fluidity as a material while maximizing its unique relationship with light and color.  While being decorative , most of my work is also functional as I’ve felt most satisfied making things that are both beautiful and useful.

I was lucky enough to be born into a glass-making family.  My grandfather worked for forty-two years as an industrial glassworker at General Electric in Cleveland, Ohio.  His experience and technical knowledge helped my father, Thomas Kekic, build the first glass studio and program for R.I.T. in Rochester, NY.

After my father passed away, I had all but forgotten his glassmaking. So it was only later in my life, at nineteen, that I fully realized my legacy while attending a beginning glassblowing class at Penland School of Crafts in North Carolina, where my father had been some twenty years before.  Penland for me came to be a place for discovering my own creative resources.  It was there that I developed a new relationship with glass, one where I began to rediscover the value of finely crafted hand-made things , not only as useful and beautiful objects but valuable for the satisfaction one gets in making them.” 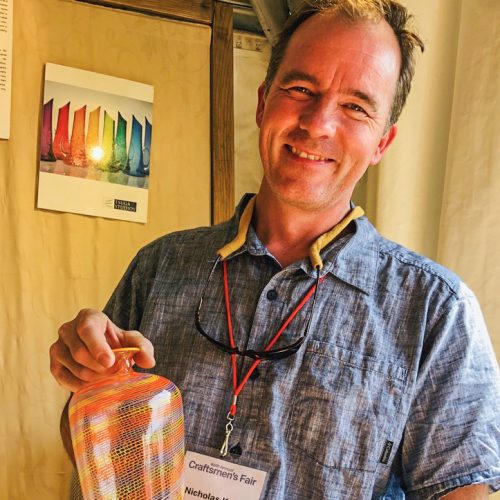