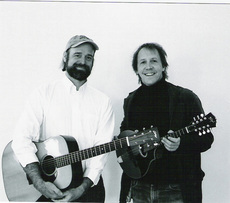 Known as the creator of the Jazz Mandolin Project, Jamie Masefield continues to expand his musical horizons by teaming up with longtime collaborator, Doug Perkins. Having performed together for 15 years in the Northeast, this Vermont based duo performs in an original, intuitive manner that sets itself apart from Nashville and West Coast styles. Perkins is best known for his experience touring nationally with the band, Smokin’ Grass, which made a name for itself at bluegrass festivals throughout the country in the late 90’s. On a number of rare occasions the duo has added Phish bassist Mike Gordon to make a trio called “Grappa Boom”, but the most noteworthy element has always been Masefield and Perkins’ unique ability to mesh, and make a singular sound with seemingly effortless interaction. The acoustic duo performs a wide variety of well known bluegrass tunes, jazz tunes and originals where a normal concert might include pieces by Bill Monroe, Django Reinhardt, Miles Davis and Antonio Jobim.