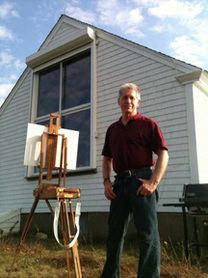 Philip Koch painting outside Edward Hopper’s Cape Cod studio, September 2010
On Saturday, December 4, come join us at Edgewater for an opening reception to meet our upcoming featured artist of the month Philip Koch, a Maryland-based painter with a four decade history painting the New England landscape. “There are a lot of reasons for the central place New England plays in my work. First, it holds the most dramatic topography in the East. Also, for a painter like myself who is actively re-examining the tradition of American romantic landscape art, New England was where the great landscape painters of the 19th and early 20th century got their inspiration. I want to come with my contemporary eyes and take a second look at what they were so excited about.” 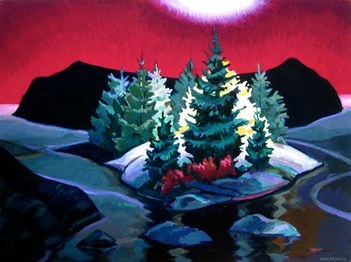 ‘The Red Whisper’, oil on canvas, 30′ x 40′
Koch himself was inspired by the work of Edward Hopper to turn, as a young artist, from abstraction to realism. “Hopper’s long shadows and sharp lights spoke to me when I was 19 and nudged me onto a path I’ve followed since.” Just this fall, Koch concluded his thirteenth residency in Hopper’s Cape Cod painting studio in S. Truro, MA.

“One of the key lessons I learned from Edward Hopper was the necessity of finding one’s unique way in painting. Hopper struggled for years to outgrow his charismatic teacher Robert Henri. And in time, he worked his way forward to making an art that both honors Henri’s ideas but stands apart from him as well.” Koch’s earlier work showed Hopper’s influence openly, with a preference for painting the architectural styles favored by Hopper. In the last 15 years Koch adopted pastel chalks as an integral part of his studio practice. They propelled him into a far more intense color palette in his oil paintings. 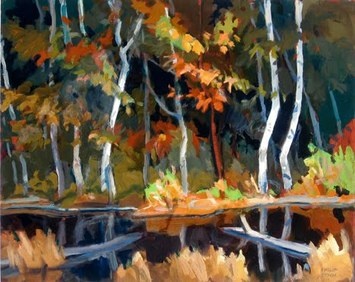 ‘Deep Forest Pool’, oil on panel, 16′ x 20′
Both sides of Koch’s family worked for Eastman Kodak Company (his maternal grandfather, John Capstaff was the inventor of the original Kodachrome color film process). In spite of this, or perhaps because of it, Koch chose not to employ photography in making his paintings. He relies instead on direct observation, memory, and invention.

Currently, an eight museum touring exhibition of Koch’s New England work is traveling the country. His work is in the Permanent Collections of ten American art museums. He is a Professor at the Maryland Institute College of Art in Baltimore. Edgewater will display a collection of Koch’s work throughout the month of December. At the opening on December 4th Koch will present an artist’s talk at 6pm.